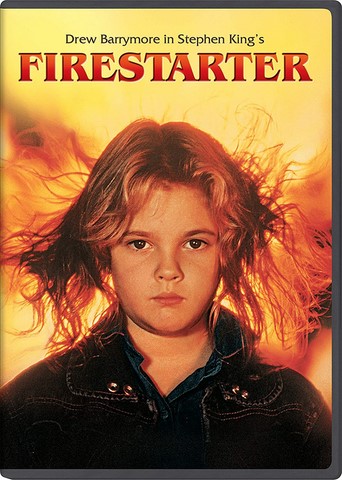 After meeting Drew Barrymore, it is easy to understand why she appears to be such a charming child on film -- she is a charming child. [INTERVIEW CONDUCTED IN 1984 PRIOR TO THE RELEASE OF FIRESTARTER.] The nine-year old actress comes from a long line of venerated actors and has herself appeared in one of the most successful films of all time. But none of this seems to have had a negative effect, she remains a bright, delightful, young lady. Before going to one of the extra classes that fill her week, Drew Barrymore, dressed in a grey and red-striped sweat suit, took a few minutes to talk about herself and a few of her friends.

LOFFICIER: What was your first acting job?

Drew BARRYMORE: My first thing ever was a commercial when I was about eleven months old. It was for puppy dog food. I love animals. My favorite things are penguins. Everywhere you go in my room are penguins.

LOFFICIER: What did you do after that?

Drew BARRYMORE: My first movie ever was Altered States. I was really fun, but it was one of the scariest movies! I've got the tape of it, but I'm not going to watch it! It was too scary!

LOFFICIER: Do you get scared at horror movies?

LOFFICIER: That must have been interesting, working with the little E.T.

Drew BARRYMORE: Yes. He was just so sweet. It was funny, because on the looping day of E.T., it was my birthday, February 22. I came into the looping room and found a note that said, "Meet us in Studio A." So, I went into studio A and there was another note that said, "Meet us in Room C." I opened the door and it was totally dark, and I turned on the light and everybody started singing Happy Birthday. It was really neat. After they finished singing, Steven pulled off this big cover and there was this really huge cake. It was shaped in a spaceship and it had a little picture of a spaceship with three kids and flowers around it.

Then, about two years later I did Irreconcilable Differences with Ryan O'Neil and Shelley Long. Then I did Firestarter with David Keith.

LOFFICIER: Tell me about making E.T. Did you think of E.T. as a little person?

Drew BARRYMORE: Yes. I really thought that kids could relate to him and think as if he was a real person and treat him like a real person.

LOFFICIER: Did you start to treat him that way after a while?

Drew BARRYMORE: Yes, I started to think that he was like a brother something to me. He was really sweet and I liked him. In the scene where he was supposed to die, we really thought that it could be real.

LOFFICIER: When you're in a part like that, do you try to make yourself pretend that it's all real?

Drew BARRYMORE: Yeah. You see, they never shoot in order, films. We were shooting it, and I came over to my mom and I was really excited because we were going to go to some other place to shoot the location part. She told me to calm down because she didn't think I would be able to cry. I said, "Okay, I'll be ready in a minute." I turned around about thirty seconds later, and I had tears streaming down my face. It was really fun to do that scene, and it was probably the most fun movie I've ever made, and probably will be the most fun movie I'll ever make in my whole life.

Drew BARRYMORE: Because, I have to say it, Steven Spielberg is the best director in the whole, wide world. I think that all his movies are excellent, more than excellent, a hundred times excellent. And I think he's the most nicest, the most generous and the most caring and loving person in the whole world, and I really love him.

LOFFICIER: Obviously you didn't have any trouble acting for him, if you feel that way?

Drew BARRYMORE: No. He didn't just say, "Look, You've got to cry in this scene." He explained it all to the kids, and he didn't just say it in a fast way like he was trying to get everything done in the nick of time. He let the children as long as it took them to start getting prepared. He always made sure that they had some time to prepare.

'Cause, you know, we have to do our schooling. Other people, when they're grown-ups, they just go off to do their embroidery, read the newspaper, have a coke, have a drink, or anything. But we, we're busy all the time. When the work comes, we have to go to work. But then, as soon as it's done, go to school. But the other people relax. It's like, wait a minute! But he always made sure that we had just a little bit of time to read over our script and get prepared and have our time.

LOFFICIER: Can you remember any funny things that happened when you
were making E.T.?

Drew BARRYMORE: Yeah, there was one really funny part. I think we were going to be doing the scene when we were in the closet. We were in the commisary and we were grabbing everything. I was in the middle of Steven and Robert and Henry was at the end. Steven needed the salt and nobody would pass it, so he finally got it and it spilled in my food. Then I spilled orange juice all over him. Henry and Robert just couldn't believe it. It was morning. And Henry and Robert started laughing, then we started having a food fight! We were just soaking wet! We went over and got into our outfits, but we couldn't stop laughing. (She starts to laugh while thinking about it.)

Finally, it was lunchtime again and we went back and decided we wouldn't do that again. But, the crew guys just started having a fight and they started having a food fight. The whole commisary, by the end of the day had eggs stuck on the wall, wet napkins on the wall, everywhere. It was so funny! I'll never forget that, that was the funnest time!

Steven makes films just so much fun that you don't want the film to end. When it was time for the end we said it wasn't fair.

LOFFICIER: Do you think that's kind of unfair, that you have to do all of that, go to school while the adults can do what they want?

Drew BARRYMORE: Well, no. Because I really love school and I want to learn. I want to go to college and be a director. See, I'm writing a script now, but I'm not telling what it is. It's just a really good story, and I can't wait to go to college and be a director and a producer. I'm going to do this film and I'm going to direct it, produce it, write it and, if I can, be in it and play the mom.

I don't want to rush growing up. I like it now and I'll like it then. Both lives are good. When you're a grown up, it can be hard at times.

The only days I don't take classes are Fridays and Sundays and I'll probably take some then too. On Mondays and Wednesdays I take ballet. Tuesdays and Thursdays I take gymnastics. Saturday I take tap and jazz. On Friday I might take tennis lessons. On Sunday I might start to take language or something.

I want to learn Italian. Because it's a really neat language, and , do you know Dino DeLaurentiis? Well, he's really nice and he did Firestarter. I just want to take Italian because I think it's neat to take.

LOFFICIER: In Firstarter. you play a little girl who has pretty neat powers...

Drew BARRYMORE: Yeah, she starts fires at just a glance.

Drew BARRYMORE: No, it isn't. It's not horror! It's very scary but I
don't think it's a horror movie. Something like Cujo or When a Stranger Calls or Halloween is a horror movie.

LOFFICIER: What happened while you were filming Firestarter? Did you have to do any scenes where there were fires?

LOFFICIER: Did you read the book before you did the movie?

Drew BARRYMORE: I have read it and I came in the room and I said, "Mommy, I'm Charlie McGee!" We were testing for the movie and I wanted to do it so bad. I went to do the test in the afternoon, and I read the book all night long. That's when I said I was Charlie McGee. We waited, and the next thing we knew we got a call from the company and they said they wanted to test me again. We went to to it and when we got home twenty minutes later we got a call that we were going to do it.

We shot the film in North Carolina, and my best friend there was Jennifer Gail Moore. She was the best friend I've ever had. I miss her so much! I spent more time with her than my own mom! I slept over almost every night. I just love them and her mother and her father and her brother are so sweet. She said, "Do you want to come live with me?" and I said sure, anytime!

It's like a real family should be. The mother stays home while the father goes to work, and they go out and they always have dinner at home. I didn't want to leave there. It was something like a perfect family should be. I felt that she was so close to me, as if she was my sister. She's my photo double.

LOFFICIER: Do you have anything you'd like to say?

Drew BARRYMORE: I want to say something to the kids. If you want to be in a movie, it's really fun, but it's not as easy as you think it is. But it's the funnest thing and if you want to do a movie, you should do one.